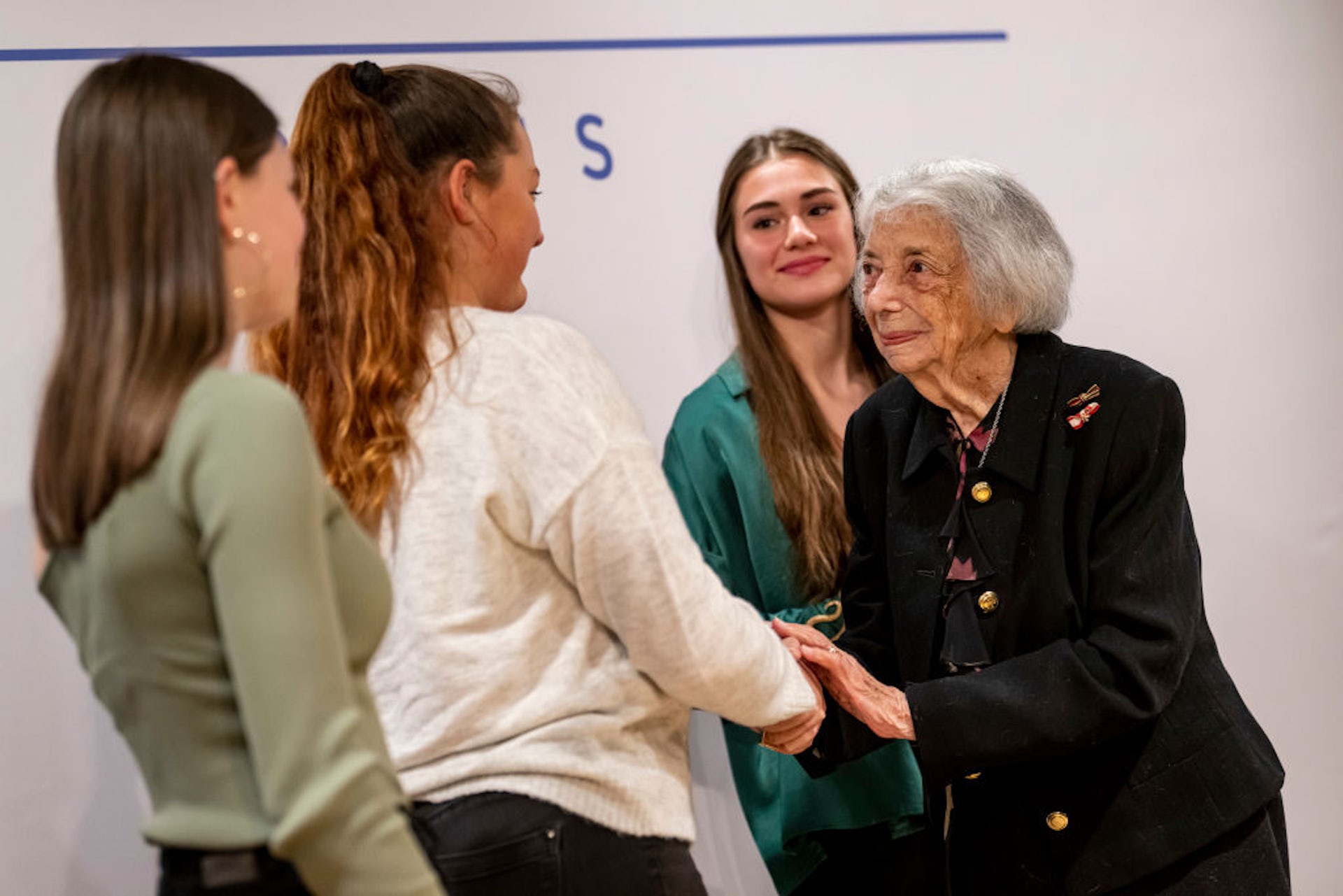 In the age of social media, anti-Semitism and Holocaust denial are no longer hidden in the margins, caused by fringe hate groups. From Yee — formerly known as Kanye West — and NBA player Kyrie Irving to members of Congress on both sides of the aisle, recognized figures have echoed anti-Semitic ideas, often online.

Besides the high profile figures, there are clear signs that anti-Semitism is becoming more widespread. In 2021, using the most recent data available, the Anti-Defamation League reports that antisemitic incidents in the United States are at an all-time high. Eighty-five percent of Americans believe there is at least one anti-Jewish trope, according to another ADL survey, and about 20% believe there are six or more tropes—a sharp increase from just four years ago. In addition, Jewish college students increasingly report feeling insecure, ostracized, or harassed on campus.

All of this comes on top of a widespread lack of knowledge about the Holocaust. As International Holocaust Remembrance Day approaches — January 27, the day Auschwitz-Birkenau was liberated — it’s important to rethink how educators like me design lessons about anti-Semitism and the Holocaust.

Rather than teaching the Holocaust as an isolated event, educators must grapple with how it relates to anti-Semitism past and present. And that means adapting to the way people learn and live today: online.

The online ecosystem where anti-Semitism thrives today is the Wild West of information and misinformation that is largely unmonitored, distributed in an instant, and disseminated by anyone. Social media posts and news feeds are often filtered through algorithms that narrow down the content users receive, reinforcing already established beliefs.

Major platforms such as TikTok, with the growing number of young people, can be used to promote anti-Semitism, as can less well-known applications such as Telegram.

According to a 2022 report by the United Nations, 17% of public TikTok content related to the Holocaust either denied or distorted it. The same is true of nearly 1 in 5 Holocaust-related posts on Twitter and 49% of Holocaust content on Telegram.

An emerging danger is AI technology. New AI resources offer potential educational tools — but also the risk of unchecked spread of misinformation. For example, AI and historical figures lets you “chat” with a historical figure, including those associated with the Holocaust: from victims like Holocaust diarist Anne Frank to perpetrators like Joseph Goebbels, Adolf Hitler’s propaganda minister.

These sites come with warnings that character responses can be fabricated and that users should verify historical accuracy, but inaccurate answers can easily be misled.

Another potential AI danger is deep fake videos. Media experts warn the potentially destabilizing “decay of truth,” the inability to tell what is real and what is fake, multiplies the amount of synthetic content. Holocaust scholars are preparing to battle how historical sources and educational materials have been manipulated by deepfakes. There is particular concern that deepfakes may be used to manipulate or undermine the testimony of survivors.

Much of my study deals with contemporary approaches to teaching the Holocaust – for example, the need to rethink education as the number of Holocaust survivors still able to tell their stories is rapidly declining. Addressing today’s toxic information landscape is another fundamental challenge that requires innovative solutions.

As a first step, educators can enhance media literacy, the knowledge and skills to navigate and critique information online, and teach learners to approach sources with sound criticism and an open mind. Key strategies for K-12 students include training them to think about who is behind certain information and evidence presented and to investigate the originators of an unknown online source by seeing what trusted websites say about their information or authors.

Media literacy also entails identifying the source’s author, genre, purpose, and point of view, as well as considering one’s point of view. Finally, it is important to trace claims, quotes, and arguments back to the original source or context.

Application of these skills to the Holocaust unit may focus on recognizing implicit stereotypes and misinformation. Online sources often depend on what those sources are, attention to, and their purpose. Lessons can also analyze how social media enables Holocaust denial and investigate common formats of online antisemitism, such as fake videos, memes, and troll attacks.

Learning in the digital age

Holocaust educators can also embrace new technologies, rather than simply lamenting their predicaments. For example, long after survivors are dead, people will be able to “talk” to them in museums and classrooms using specially recorded testimonials and natural language technology. Such software can match a visitor’s questions with relevant portions of pre-recorded interviews, responding almost as if they were talking to the visitor in person.

There are also immersive virtual reality programs that combine recorded survivor testimonies with virtual reality visits to concentration camps, survivor towns, and other historical sites. One such exhibition is “The Journey Back” at the Illinois Holocaust Museum and Center. Not only can VR experiences transport viewers to such locations in a more realistic way than traditional lessons, but they also allow learners to partially determine how to interact with the virtual environment. In interviews I conducted for my current research, viewers report that virtual reality experiences of the Holocaust cause them to feel an emotional interaction with a survivor.

People often learn about themselves by exploring their family trees, examining legacies handed down from ancestors and telling stories around the dinner table – which helps people understand who they are.

The same principle applies to understanding society. The study of the past provides a roadmap for how past people and events shape today’s conditions, including anti-Semitism. It is important for young people to understand that the horrific history of anti-Semitism did not originate with the Holocaust. Lessons that lead students to think about how indifference and cooperation fuel hate — or how ordinary people help stop it — can inspire them to speak and act in response to rising anti-Semitism.

Holocaust education is not a neutral endeavour. As survivor and researcher Elie Wiesel said when accepting the 1986 Nobel Peace Prize, “We must always take sides. Neutrality helps the oppressor, not the victim.”

Alan Marcus is Professor of Curriculum and Instruction at the University of Connecticut.

The conversation grew out of deep-rooted concerns about the fading quality of our public discourse and recognition of the vital role academic experts can play in the public arena. Information has always been essential to democracy. It is a societal benefit, like clean water. But many now find it difficult to trust the media and experts who have spent years researching a topic. Instead, they listen to those with the loudest votes. These unconscious opinions are amplified by social networks that reward those who stir up anger rather than insight or in-depth discussion. The Conversation seeks to be part of the solution to this problem, raising the voices of true experts and making their knowledge available to all. The conversation is posted every night at 9 p.m. on FlaglerLive.
Previous conversations: