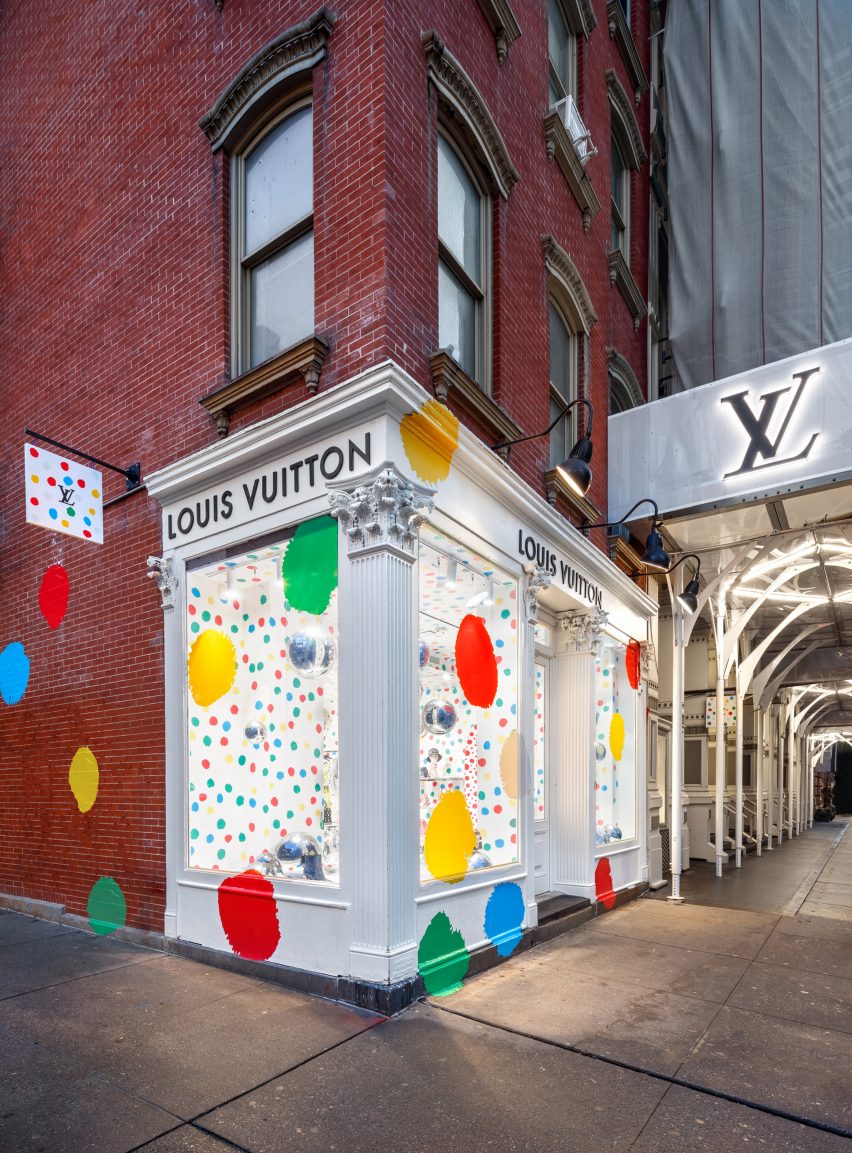 The launch of this collaboration saw the redecoration of a number of flagship stores around the world with Kusama’s signature polka-dot figures, life-like animatronics of Kusama’s paint in shop windows, and an inflatable replica of Kusama peeking out onto the ceiling of Louis Vuitton’s Champs-Elysee store.

The Louis Vuitton Champs-Élysées, an Art Deco building built in 1912, houses Kusama’s largest business. Large polka dots have been brushstroked across the facade of the building and paired with an oversized humanoid replica of Kusama, which is strapped and peered over the roof of the building.

In New York’s Meatpacking District, a Louis Vuitton pop-up has been transformed into a “canvas” for Kusama’s vision. The space was covered in yellow and covered in black polka dots of various sizes across the walls, floors, and ceiling.

Reflective chrome spheres are arranged in the shape of the Louis Vuitton logo and suspended throughout the interior space of the pop-up door, endlessly mirroring the mottled shape and capsule collection, which is displayed throughout the space.

“Louis Vuitton is celebrating its latest collaboration with Yayoi Kusama in New York with a special pop-up space in the Meatpacking District that’s been transformed into a canvas for her visions and her iconic art, which opens to the public on January 6,” the brand said.

The collection is the second collaboration between Louis Vuitton and Kusama, returning a decade after the fashion house and artist first collaborated in 2012. 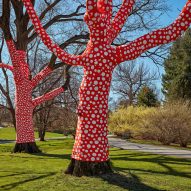 In 2006, Marc Jacobs, then Louis Vuitton Creative Director, approached Kusama and met her in her studio where she hand-painted the Louis Vuitton Ellipse bag with its famous polka-dot motif – the beginning of what would be one of Vuitton’s most successful art collaborations.

Six years later, in 2012, Jacobs released a collection of Kusama’s lacquered bags and ready-to-wear pieces to coincide with her 2012 retrospective at the Whitney Museum of Modern Art in New York City.

A pop-up space in Harajuku, Tokyo continues the yellow and black theme. The ground floor of the space is lined in yellow with black speckled motifs, while the colors have been inverted for the first floor which has a black plinth with yellow specks on its surface.

Elsewhere in the world, select Louis Vuitton stores saw life-like, human-scale animatronics of Kusama placed in window screens with a robotic replica of Kusama repeatedly drawing polka dots on the surface of the glass.

In 2020, Kusama placed more than 1,000 reflective spheres on the surface of a pond and draped trees in polka dots at the New York Botanical Garden as part of an outdoor exhibit.

Louis Vuitton recently unveiled a collection of 200 boxes reimagined by 200 architects and designers, including Frank Gehry and Sou Fujimoto, to celebrate its founder’s 200th birthday.