FifthPeople are losing faith in the NHS amid record waiting lists and ambulance delays, new surveys reveal today, as The Times launches a year-long groundbreaking investigation into the future of health and social care.

The YouGov survey found a significant collapse in public confidence in health services with more than two-thirds of people saying they thought service delivery was ‘bad’ and 80 per cent saying the NHS had worsened in the past five years.

The Times panel, which will report before the next election, will take evidence from across the health service and map out a radical blueprint for far-reaching reform.

It follows the Times Education Committee, which was published last summer and its findings endorsed by Rishi Sunak and Sir Keir Starmer.

The Health Committee is against deteriorating results across a range of indicators in the wake of the Covid pandemic and funding crisis.

Analysis by The Times last week found 50,000 more people had died in the past 12 months than usual, with NHS delays being blamed for one of the deadliest years on record. There were 1,600 excess deaths in the week of Christmas as long waits for ambulances, cold weather and rising flu infections increased death rates by a fifth.

The general desire for reform was highlighted by the survey which found that only 22 per cent of people thought NHS services were ‘good’ with 67 per cent saying they were ‘bad’.

Only 15 percent said the health service was currently doing “well” compared to 78 percent who said it was doing “poorly”.

Voters were pessimistic about the future of the NHS, with 58 per cent saying they thought it would get worse over the next few years. Although the majority were still confident it would be available for them in an emergency, 39 per cent were not and 63 per cent doubted the NHS would provide them with quality and timely treatment if they had a less severe medical condition.

The committee will include a group of senior physicians, business leaders and policy experts who will be commissioned. These include Lord Rose of Monoden, chief of Asda; Lord Darzy of Dunham, former surgeon and minister; Dame Jane Dacre, former President of the Royal College of Physicians and Sir John Bell, Regius Professor of Medicine, University of Oxford. The long-running crises affecting the NHS, exemplified by influxes of ambulances waiting to be discharged, have eroded public confidence in the service.

Bell compared the crisis in the NHS to the First World War. “They seem intent on pursuing the strategy of the Battle of the Somme, hiring … doctors and nurses and sending them into battle. It does not lead to measurable future progress and costs a fortune.” Dacre described the “endless need gap” as a result of changing demographics and public expectations.

Matthew Taylor, chief executive of the NHS Confederation who is also on the committee, said a change of priorities was needed. He said, “The system is unsustainable because it is currently configured.” “You can get to the point where health and care no longer take up an ever-increasing proportion of GDP but only through transformative change. We need to reduce the time people spend in the hospital. We have to stop looking at health as this huge gap that we’re pouring.” resources and to realize that a healthier population is a more productive and economically active population.”

•The NHS in crisis: why you need urgent resuscitation

•What is the Times Health Commission? He explained his goals

Lord Rose said the ‘pipeline’ was as important in the hospital as the supermarket but that is now broken by a lack of social care and GP appointments. “You make sure the right goods get in and out as quickly as possible. There shouldn’t be any time left. Right now in the NHS we have a machine that is not fit for purpose.”

Starmer warned on Sunday that the NHS needed reform if it was to survive. He said it would always be free at the point of use, but he wanted to use the private sector more and he backs plans to allow patients to self-refer for things like routine tests and physiotherapy without going through GPs.

Meanwhile, the Royal College of Nursing has warned it will dramatically escalate the strike, and has asked all eligible nurses to strike early next month if there is no progress in negotiations with the government over wages.

Lord O’Neill of Gately, a former Goldman Sachs banker and Chancellor of the Exchequer, and another commissioner said: “We need to step back from the crisis of waiting lists and ambulance times and cancer and say – ‘Wait a minute what are we doing as a country?'” How can we spend so much on health compared to education? It’s crazy that we seem endlessly happy to spend more and more taxpayer money on things that seem so inefficient. Unless we invest properly in preventive health, the rest is just too much waste.”

Millions of Britons now doubt they can count on the NHS for timely and quality treatment, even in emergency situations.

Senior NHS leaders fear the lack of trust could mean a repeat of the problems seen at the start of the pandemic, when people would not apply for NHS care because they were afraid or did not want to burden services. 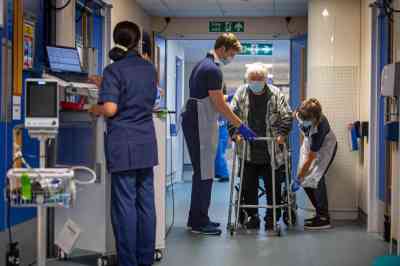 One expert said of the current NHS: “It’s clear that for far too many people, the timing and experience of accessing care is getting worse.”

Private health services report an increased interest in both insurance and self-financed treatment.

“This is the most challenging and stressful for the health and care system in all the time that I’ve worked on health and care policy,” said Sally Warren, director of policy at the King’s Fund think tank and commissioner of Timers. She said it felt like there was “no stopping anywhere in the system”.

Although the majority of those YouGov polled said they were still confident the health service would be available to them in an emergency, 39 percent were not.

Patient groups have called for better communication with the public about plans to improve services. “It’s clear that for far too many people, the timing and experience of accessing care is getting worse,” said Jacob Lant, Head of Policy at Healthwatch England, Patient Champion.

He said the NHS needed to reassure the public “by presenting a clear and understandable plan of action, and setting out the pace at which we should expect to see improvements”.

Patients’ Association chief executive Rachel Power said the health secretary should call out a national incident, adding: “The government must show leadership during this crisis.”

Times columnist Mark Porter said people’s experiences vary greatly depending on their condition. “If you have meningitis you still take care, but if you have a child with ADHD, it’s like sticking a camel in the eye of a needle right now,” he said.

The survey found a fairly even split between 35 per cent of people who found it easy to access NHS services in the last year, and 38 per cent who found it difficult.

But those who used the health service were more likely to be satisfied with the level of care they received than dissatisfied, at 63 percent versus 32 percent.

Some, including the Labor Party, have proposed improving access by allowing the public to refer themselves directly to specialists without going through GPs.

Porter said, “This perception of a gatekeeper right now is a bit academic because whether I’m standing at the gate or not, you’re stuck in this huge line of snakes.”

She said the trusts were working hard “to find new and better ways to deliver care” but that it would take time to get levels of trust back up.

She suggested: “A very important first step would be for the government and the unions to get together and find a way to pay the staff. That would give everyone a boost.”

Her call has been supported by Matthew Taylor, chief executive of the NHS Confederation and a member of the Thames Health Committee.

“Nobody working in the NHS wants to go back to the way things were at the start of the pandemic where not many people came forward for support,” he warned.

The survey found that 78 percent of people think the government has handled the recent wage dispute and industrial strikes poorly, and only 14 percent said it has handled unions well.

The number of people on the waiting list for planned NHS care for the first time since the pandemic fell in November, at 7.19 million, down from 7.21 million in October. Before the pandemic, the total was 4.4 million.

However, performance in urgent care and emergency is by far the worst, including average wait times of more than an hour and a half for stroke and heart attack patients who call for ambulances.

Private medical insurance company Aviva said it now covers 1.1m people, up from 0.9m in 2020. HCA Healthcare UK says the number of people choosing to pay directly for treatment has risen by almost a fifth.

Porter said he now actively asks patients if they have a special cover “because they’re seen faster, and it gets them off my waiting list.”

He said: “If they’re having hernias in Bristol in a private hospital, that’s another thing they don’t get on the list locally for the NHS.” “And I’ve never seen any evidence that having a private service slows NHS provision.”

But he worries that waiting lists are driving people to private clinics, which sometimes over-prescribe powerful drugs.

A government spokesperson said: “This government is fully committed to supporting the amazing NHS providing up to £14.1 billion for health and social care over the next two years on top of record funding.

“More NHS doctors and nurses are working in England to deliver additional appointments and speed up diagnoses with the NHS effectively eliminating two-year waiting periods.

“We are aware of the pressures the NHS is facing, so additional funding of up to £250m has been announced to immediately help reduce hospital bed occupancy, relieve pressure on A&E and unlock much needed ambulance deliveries.

“This is on top of the £500m Discharge Fund to accelerate the safe discharge of patients, launch virtual wards to free up hospital beds and reduce waiting times.”

An NHS spokesperson said: “We are delivering record numbers of GP appointments, making progress on the Covid backlog and delivering millions of vaccines to protect the most vulnerable from serious illness.”